Donkeys, locally known as ‘burico’, had a long history of serving the people of Aruba until – well…until they didn’t anymore. Over 1,400 donkeys were living on the island at the turn of the 20th century. They served as the primary form of transportation for those who could afford them and worked with farmers and tradesmen, pausing to rest alongside their masters during the heat of the day. Some were wild, running free along the craggy coast of Aruba’s north side.

Little by little, as affordable, commercial travel made the island accessible to the world, Aruba became a more developed country. A concrete jungle grew up around the donkeys and they were replaced by automobiles that were easier to maintain and better suited to travel on freshly paved roads.

Rendered useless and cast off, Aruba’s donkey population suffered mishaps, setbacks and indignities in the years that followed. They were the victims of countless traffic accidents, used to feed carnivorous circus animals and lost many of their numbers to disease. In the early 1970s, only 20 donkeys were counted on the island. But, if you know the burico, you know they’re a stubborn breed – much too willful to go gently into island-wide extinction.

By the late 1990s, Aruba’s donkey population was back on the rise but things were still not going well for them. In 1997 ‘Stichting Salba Nos Burico’, literally translated to ‘Foundation Save Our Donkeys’, was established as a place for injured or displaced donkeys to go. It quickly became known as the Donkey Sanctuary because for the first time in a long time, the wild donkeys of Aruba had a safe place where they were cared for and wanted.

At the heart of the operation, sits a woman who knows every donkey’s name. Desiree Eldering decided that she would like to care for a donkey the first time she met one, while living on our neighbouring island, Curaçao, 22 years ago. Now, she cares for over 130 of them. Desiree has worked with them for two decades and has been running the donkey show for 15 years. Her passion for her lovable charges inspired her to write the beloved, local children’s book ‘Kosh Kosh the Green Donkey from Aruba’.

Desiree smiles as she talks about the residents of the sanctuary. Floppy the donkey is terribly shy and 7UP is smart enough to open the gates on the visitor center after hours and invite her friends in for an unauthorized (and unwelcome) party on the porch. The older donkeys, approaching their 35 year life expectancy mark, are separated from the herd because the younger ones tend to hog the hay. There is an occasional female ‘Jenny’ who comes in pregnant and the sanctuary has a playful foal for a little while, but foals grow fast and they are few and far between. Most of the donkeys in the sanctuary are in the prime of their lives.

Dr. Contreras, a local veterinarian, donates his time and energy making sure that all the donkeys who live at the sanctuary are microchipped and sterilized. Perhaps one day in the future, there will be a breeding program in place to make sure that Aruba is always home to the creature that was so instrumental in her early success; but, for now, the local donkey population is too closely inbred to thrive and protecting the existing animals is more important than propagating the species.

It truly takes a village to save the donkeys, the walls in the visitors center are testament to that. Local businesses make generous donations of money, transportation and resources; while  private donors adopt donkeys, shop in the gift shop (where all the proceeds go directly to the donkeys) or make one time donations.

All of this helps maintain the burico in the manner to which they have become accustomed; fresh hay and drinking water in a spacious enclosure, with access to plenty of shade. 30 volunteers help keep the donkeys maintained and often entertained – Aruba’s donkeys are every bit as friendly as the locals. Visitors to the sanctuary provide several other things that the donkeys can’t get enough of – fresh carrots, apples, lettuce, potatoes and most importantly – affection.

The future of the Aruban donkeys might be uncertain but one thing is for sure – the Donkey Sanctuary is the best place for our 4-legged, braying buddies. For more information or donations, please visit the Donkey Sanctuary’s website at www.arubadonkey.org. 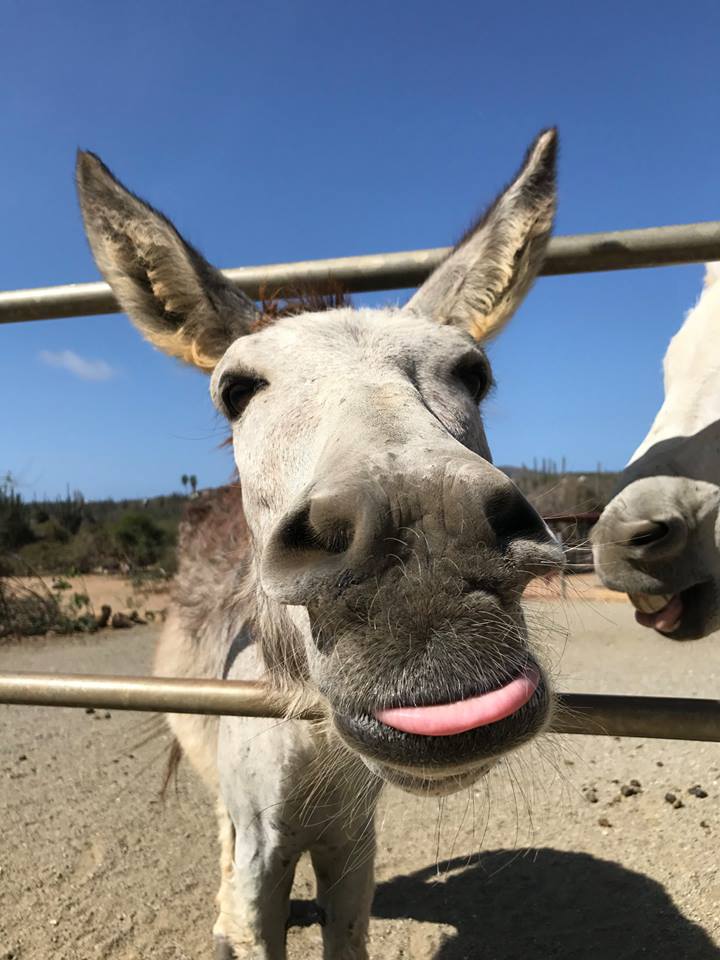