Courtesy of Victoria M. Razak, writer of the book: Carnival in Aruba

Every year In January and February, the Aruban Carnival celebrates another year of its popular and impressive Carnival season. The amazing atmosphere and cultural diversity during Carnival is definitely something you have to experience when visiting Aruba. The exciting parades, jump-ups, beautiful costumes and a truly vibrant atmosphere are just a few reasons why Aruba is packed during this period, and this is how it all began:

The first signs of carnival celebrations occurred back in 1921, when some of the many social clubs were having costumed celebrations. These parties took place on the social clubs’ premises and were mainly elite European-style balls, like debutante balls and costumed parties to celebrate seasonal festivities. After a few years, The Americans in San Nicolas (who worked in the Lago Oil Refinery) introduced their own Euro-American style seasonal festivities, such as the fancy dress dance by the Lago Marine Club, where members dressed up as Clowns, Caballeros, bull fighters and coons. These seasonal festivities were mainly parties around Halloween, Christmas and Carnival, and became the first step into the carnival celebrations as we know it now.

In these years the Lago Oil refinery started to reach their employment peaks with most of their recruitment done on the Caribbean-English islands Trinidad, Jamaica and British Guyana. These English immigrants were the first to organize a parade in San Nicolas for the allied victory of World War II.  In the years after the victory, the Trinidad carnival was flourishing; Mas (masquerade) bands were growing larger and it became a period of enormous creativity for the Trinidadians. It was these immigrants that enriched Aruba with the Trinidadian style of carnival.

Meanwhile the carnival celebrations of the Social groups were growing larger and larger. All clubs were now having carnival queen elections on the island, and the first parades were held by Arubas oldest social club: the Tivoli social club.

The third era of Aruban carnival began when the native Aruban and English groups joined to plan the first island-wide public carnival under a (temporary) central carnival committee. Hosted by the Tivoli club, the representatives of the various social clubs held a meeting to coordinate their efforts towards a single grand carnival parade in Oranjestad, combining Steel bands, floats and costumed mas players. The Carnival committee organized the first Carnival Queen Election.

In 1957, the custom of having two organized grand parades began; the first in San Nicolas and the second one in the capital Oranjestad. After eight years, the calypso and roadmarch became an integral part of the carnival season when the calypso competitions were introduced. 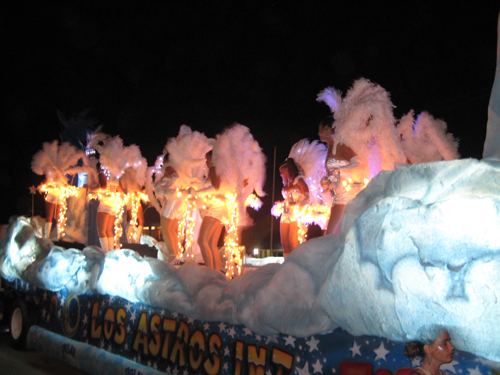 The first year in this era was known for the establishment of the S.A.C; The Stichting Arubaanse Carnaval (Aruban Carnival Foundation). This committee was founded on exactly 11:11 AM of the 11th day of the 11th month, which is known as the Fools Day. The committee is the main organizer of the Carnival festivities, but not the only one: In 1981 the Tivoli social club established the lighting parade.

Today, the Aruban carnival has grown to one of the largest in the Caribbean with a month full of parades and activities. Make sure to check out VisitAruba’s carnival schedule for more information.