Long before becoming the Hilton Aruba Caribbean Resort & Casino, the iconic hotel was originally named Aruba Caribbean Hotel, and was the first luxury resort on the Caribbean Dutch island of Aruba. The hotel officially opened its doors in 1959 and paved the way for tourism on the island.

For many years, the Lago Oil Refinery was the main source of employment for the island. However, due to automation in the 1950s, many employees lost their jobs. To boost the economy, a new industry was required, and the government proposed the most feasible choice – tourism.

To commemorate its 60th anniversary, and to celebrate the hotel’s breakthrough as the pioneer in Aruba’s luxury hospitality industry, the resort invites guests and locals to join 60 days of celebration together with family and friends, with a series of promotions, including special local room rates, celebration menus across local-favorite restaurants such as Laguna and Sunset Grille, and eforea spa specials.

Locals and guests can also share their memorable moments at Aruba Caribbean Hotel through a photo contest activity that will be launched on social media on Thursday, July 18. Carrying the theme of iconic legacy, participants can submit their unforgettable memories for a chance to win great prizes.

The 60 days of celebration are also about giving back. As part of its corporate social responsibility initiatives, Team Members and leaders at the resort will be restoring a basketball court in the De Vuyst neighborhood in San Nicolas.

Nicknamed the “Grand Dame,” the resort was designed by one of America’s most famous hotel architect, Morris Lapidus, who also designed landmark hotels such as the Fountain blue, the Eden Roc and the Americana. Of the 276 hotels designed by Morris Lapidus, his design of the first large hotel in Aruba is considered one of his best.

Guests of the resort can witness the resort’s celebrated legacy in vintage photographs throughout the property, as a reminder of past decades, hung on walls from the lobby to the hallways and rooms, preserving the nostalgia yet pairing it with the latest technology, placing great value on innovation, and ushering its special brand of hospitality into the future.

Throughout the year, Hilton Aruba Caribbean Resort & Casino, will continue to celebrate its Diamond Jubilee, with a series of events, activities and surprises for travelers and locals alike.

Did you know that Aruba’s most popular drink was invented at the Aruba Caribbean Hotel?

Every single bartender on the island agrees that the Aruba Ariba was created at the Aruba Caribbean Resort, on July 1st, 1963. Juan “Jocky” Tromp, the creator of the Aruba Ariba originally called it, the Ariba Aruba. During a mixology contest, Jocky prepared a special drink recipe which stood out among the rest as the best.

That original recipe included vodka, and 151 rum, laced with Crème de Banana and flavored with fruit juices. The infusion of orange, cranberry and pineapple juices lend the drink its friendly appeal while the distinctive liquor adds punch. The cherry grenadine syrup, or the Triple Sec are popular alternative options, the Maraschino cherry on top, a must.

The Aruba Ariba cocktail has been the signature cocktail at Hilton Aruba Caribbean Resort & Casino, since then. Many visitors solicit the recipe and recreate it at home, bringing back fond memories of vacations in the sun.

The Iconic Wall of Fame at Sunset Grille

On the culinary front, the Sunset Grille, the resort’s signature restaurant is the only resort restaurant in Aruba with extensive outdoor seating, hanging over exotic waterfalls and overlooking the Palm Beach tree-tops.
In 2019, the steakhouse commissioned an impressive wall of original caricatures honoring the influential movers and shakers of the Aruba hospitality scene, and people who played and keep playing a significant role in society, including government officials, entrepreneurs, and hospitality pioneers. The art project reprised a previous Wall of Fame in an extended format and anchored the restaurant in Aruba’s business landscape, commemorating its noteworthy people and their achievements and contributions. Aruba’s A-listers draw a good number of people who come to the Sunset Grille to admire the work and snap souvenir pictures.

Oscar’s Market in the lobby of Hilton Aruba Caribbean Resort & Casino offers a new type of experience that redesigned the lobby as a lively social hub for networking, snacking and connecting.
The name Oscar’s Market occupies a special place of honor in the heart of the resort, as it is a form of recognition for the life’s work of Aruban Tourism Pioneer, Oscar Henriquez. Oscar Henriquez was among those who conceived the luxury high rise hotel on Palm Beach, as Aruba’s first Commissioner of Finance, Economic Affairs, and Tourism in 1955. At the time, he was the key decision-maker in the planning of the resort, which preceded the introduction of tourism to the island.
Oscar Henriquez was also President of the government-sponsored company, ARUVEN, responsible for the planning and financing of the island’s first five-star luxury hotel, the Aruba Caribbean Hotel, now Hilton Aruba Caribbean Resort & Casino.

In December 2016, at the reopening ceremony of the resort, which was held in the newly renovated lobby, owners’ representative Rene Kan, shared his vision. Mr. Kan stated he was very excited about the future of the hotel. He saw it as the number one travel destination on Aruba. He saw a place where teammates come to work and leave each day with smiles on their faces and a hotel whose place in history cannot be forgotten but whose future is an integral part of his island-home. He thanked everyone who put their trust in the ownership team, and vowed to work together to create a beautiful experience for anyone who visits the resort and the fantastic island of Aruba. His vision still stands.

It’s been more than four years since Hilton Hotels & Resorts, the flagship brand of Hilton Worldwide announced the expansion of its global presence to also include the 357-room Hilton Aruba Caribbean Resort & Casino, on the lovely 15-acre beachfront oasis on Palm Beach, Aruba.

Today, the company is proud to say that Hilton Aruba Caribbean Resort & Casino is one of the most successful Hiltons in the world, and one with the highest occupancy rates in the chain.

Early in the year, the resort won the coveted “Hotel of the Year,” title, coming in first among the chain’s full-service properties of its size, operating between 351 to 750 rooms, in the Americas. The honor was bestowed on the resort during the Hilton Leadership Conference in Orlando, acknowledging accomplishments in exceeding guest expectations and meeting financial goals.

Most importantly, the resort is the only one on the island where team members are shareholders, by virtue of their pensions, invested and bearing fruit, in the upscale resort in a prime location on picturesque white sand beaches, welcoming travelers for six decades into a popular resort destination. 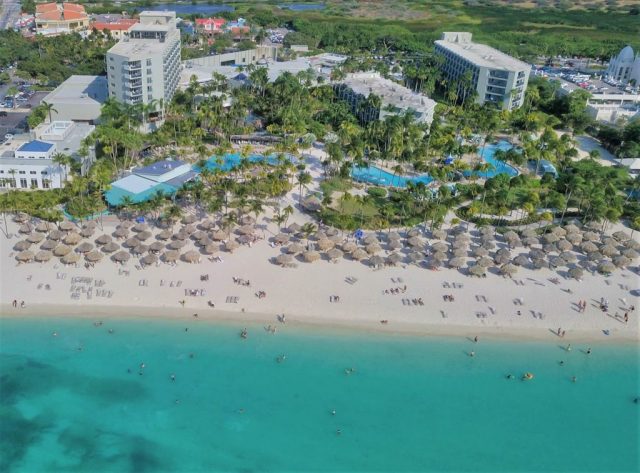 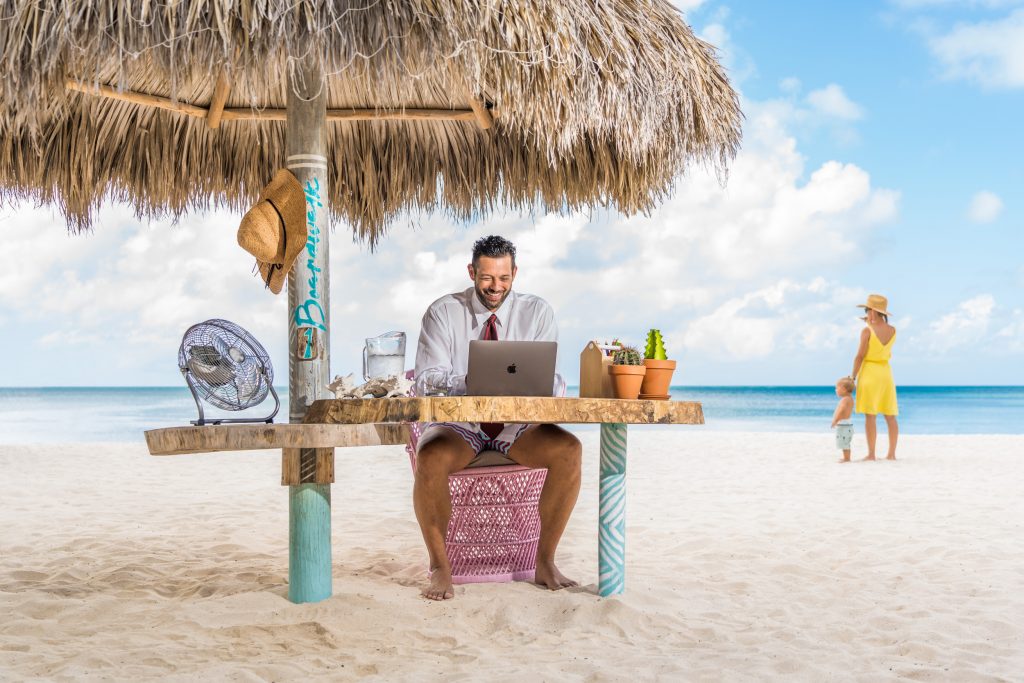 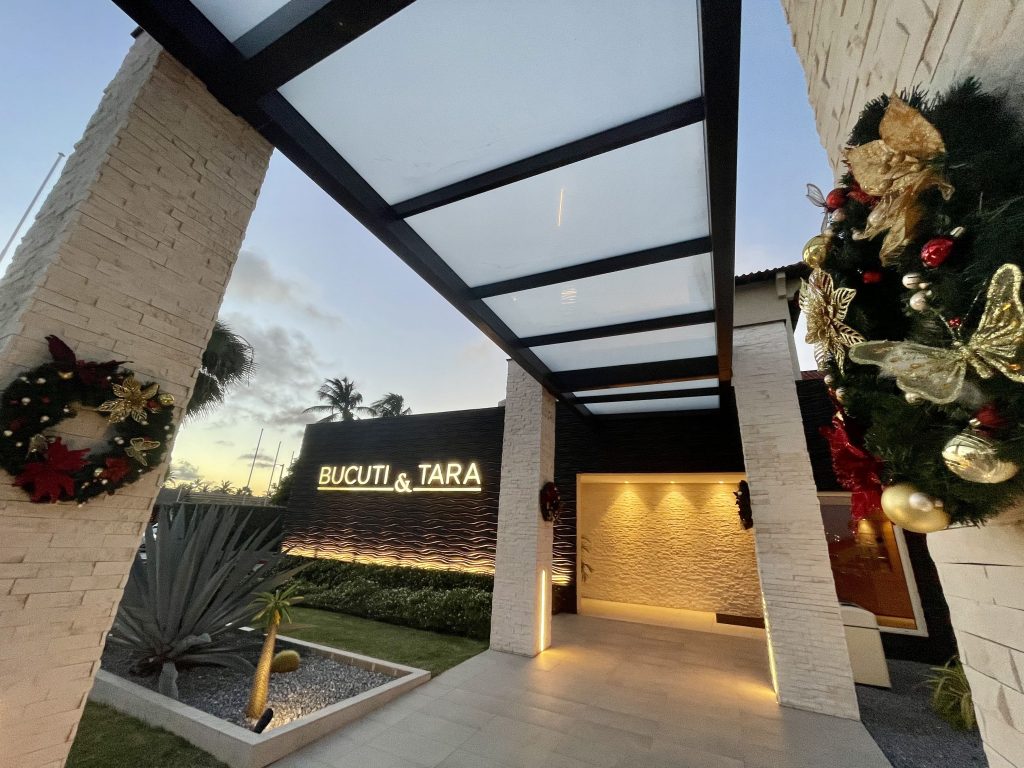 The Spirit of Christmas Arrived at Holiday Inn Resort Aruba