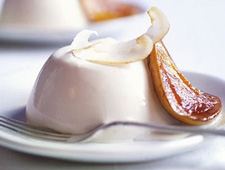 Cook over low heat, stirring constantly, until mixture thickens.
Blend in the gelatine until it dissolves.
Chill in the refrigerator until the mixture begins to thicken.

In a separate bowl whip until stiff:
1 cup heavy cream
Beat the custard mixture with a wire whisk, then fold it gently into the egg whites.
Fold in the whipped cream.
Mound the pudding in a serving bowl and chill until firm.