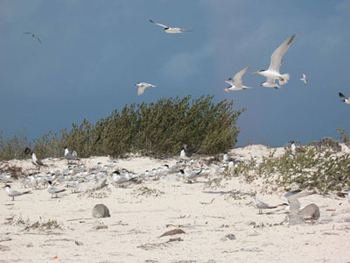 Cayennes (Sterna sandvicensis eurygnatha) are terns, small gull-like seabirds, which breed on Aruba from March till August. They are entirely sea-going and feed mostly on small fish but also squid and some insects. Aruba is an important area for this tern specie, about 15% of the world population breeds here. On Aruba the Aruba Tern Project monitors the terns for nine years now. The project is designed and conducted by Dr. Adrian del Nevo of Applied Ecological Solutions Inc. in collaboration with the Aruba Government, Caribe Alaska and funded by Valero Aruba Refinery. Within the project the terns in San Nicolas Bay, are banded. This year a total of 1200 Cayenne chicks were banded, which are a lot more in comparison with other years. In all the years prior about 7000 chicks were banded. The birds are banded so that the location of its death can be determined upon retrieval of the band. In Oranjestad about 100 chicks were reared. 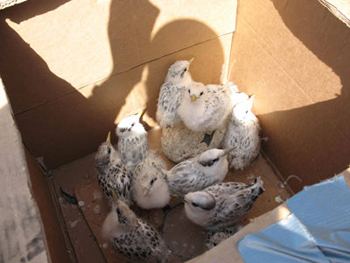 To band the chicks the project had to use several volunteer groups. This because of the greater amount of chicks, to reduce the amount of time the chick is separated from its parents and because growth data are collected at the banding. This data would be the length of the wing and the weight of the chick. To assess the growth of the chick, several of them would need to be recaptured within a week and have their wing length remeasured. The difference in wing length would provide an estimate of their growth. Also the amount of chicks recaptured against the chick newly banded would provide an idea of their total number. Department of Agriculture, Husbandry & Fisheries assisted with the monitoring of the Cayennes in Oranjestad and the banding of the chicks.

Indications are that this year there is a lot more of small fish. According to the Fishery Section of the department lots of fishermen mentioned this unusual amount of fry fish. On the reefs at banding one could see the amount of fish being brought in by the birds. In general terns would feed at 60 km. north of Aruba. The great amount of chicks could also be to the fact that no rats were signalled upon the reef the Cayennes breed upon, contrary to another reef Islet. Next to the good news about the successful reproduction of the Cayennes it has to be said that the endangerment of the seabirds on Aruba has not diminished.

Coastal development is still in full bloom. This directly eliminates suitable habitat for the birds, but also increases the pressure of human activity on adjacent ones. This year in March, human activity has been noticed on the reefs of San Nicolas Bay. The government of Aruba would like to conserve them for nature. To this end the Veterinary Service approached a professional pest control to eradicate the rats on the reefs. 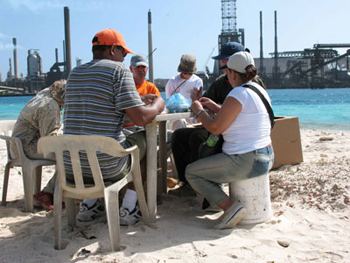 For more information call +297 585 6473 or email Department of Agriculture, Husbandry and Fisheries directly.

back to Flora and Fauna