On Thursday February 26 1998 a total eclipse of the Sun was visible from within a narrow corridor across the Western Hemisphere. Aruba was one of the main vantage points for getting a clear view of this natural phenomenon. The path of the Moon's umbral shadow started in the Pacific, continued through northern South America and the Caribbean Sea, and ended at sunset off the Atlantic coast of Africa. A partial eclipse was seen within the much broader path of the Moon's penumbral shadow, which included parts of the United States and eastern Canada, Mexico, Central America and the northern half of South America. 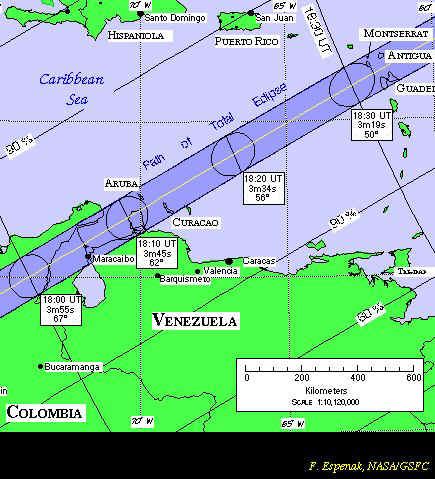 Aruba shared the good weather prospects characteristic of northern South America. The eclipse center line passed between Aruba and Curaçao, so observations from these islands imposed a time penalty. At the northern tip of Curaçao, the eclipse duration of 3m 32s was only 11 seconds shorter than on the center line (3m 43s). At the southern tip of Aruba (3m 34s), the time penalty was only 9 seconds. Thus, both islands made excellent locations since they shared similar weather conditions. Aruba's dry climate is reflected in scant vegetation - mostly cacti and wind-bent trees (Divi-Divi tree). February is the cool season with temperatures in the mid twenties Centigrade. Precipitation is low, approaching a minimum in March and April. February is also the sunniest month, with a mean cloud cover of less than 40%. Relief on the island is low, only 188 meters at the highest point, providing little disruption of the trade winds. The combination of dry interior and the steady trade winds brings lots of dust. 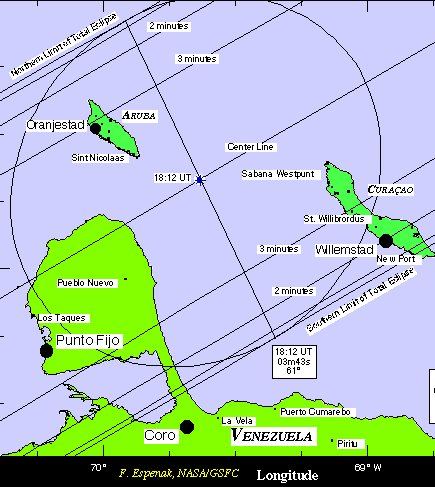 Most hotels in Aruba are located along the northwest coast where totality was under three minutes. However, a 25 km drive to the island's southern end increased the duration by 30 seconds.

San Nicolas is the site of a large oil refinery, with appropriate smells and sights. At one time this was the largest refinery in the world, but has been operated at only part of its capacity since 1991. South of the refinery, along the coastal road at Seroe Colorado, is the former Exxon staff residential area (known as "the colony") which includes two west-facing beaches (Baby Beach and Rodgers Beach). The residential site and beaches are accessible to the public. From an astronomical point of view the beaches offered the best location on the island.

The weekend before the eclipse was the end of Carnival across the Caribbean, marked by parades and other festivities.

The sun can be viewed safely with the naked eye only during the few brief seconds or minutes of a total solar eclipse. Partial eclipses, annular eclipses, and the partial phases of total eclipses are never safe to watch without taking special safety precautions. Even when 99% of the Sun's surface is obscured during the partial phases of a total eclipse, the remaining photospheric crescent is intensely bright and cannot be viewed safely without eye protection (Chou, 1981; Marsh 1982). Do not attempt to observe the partial or annular phases of any eclipse with the naked eye. Failure to use appropriate filtration may result in permanent eye damage or blindness!

Generally, the same equipment, techniques and precautions used to observe the Sun outside of eclipse are required for annular eclipses and the partial eclipses of total eclipses (Reynolds & Sweetsir, 1995; Pasachoff & Covington, 1993; Pasachoff & menzei, 1992; Sherrod, 1981). The safest and most inexpensive of these methods is by projection, in which a pinhole or a small opening is used to cast the image of the Sun on a screen placed a half-meter or more beyond the opening. Projected images of the Sun may even be seen on the ground in the small openings created by interlacing fingers, or in the dappled sunlight beneath a leafy tree. Binoculars can also be used to project a magnified image of the Sun on a white card, but you must avoid the temptation of using these instruments for direct viewing.

The Sun can be viewed directly only when using filters specifically designed for this purpose. Such layers usually have a thin layer of aluminum, chromium or silver deposited on their surfaces that attenuates both visible and infrared energy. One of the most widely available filters for safe solar viewing is a number 14 welder's glass, available through welding supply outlets. More recently, aluminized mylar has become a popular, inexpensive alternative. Mylar can easily be cut with scissors and adapted to any kind of box or viewing device. No filter is safe to use with any optical device (i.e. - telescope, binoculars, etc.) unless it has been specifically designed for that purpose. Experienced amateur and professional astronomers may also use one or two layers of completely exposed and fully developed black-and-white film, provided the film contains a silver emulsion. Since all developed color films lack silver, they are always unsafe for use in solar viewing.

Unsafe filters include color film, some non-silver black-and-white film, medical x-ray films with images on them, smoked glass, photographic neutral density filters and polarizing filters. Solar filters designed to thread into eyepieces which are often sold with inexpensive telescopes are also dangerous. They should not be used for viewing the Sun at any time since they often crack from overheating. Do not experiment with other filters unless you are certain they are safe. Damage to the eyes comes predominantly from invisible infrared wavelengths. The fact that the Sun appears dark in a filter or that you feel no discomfort does not guarantee that your eyes are safe. Avoid all unnecessary risks. Your local planetarium or amateur astronomy club is a good source for additional information.

In spite of these precautions, the total phase of an eclipse can and should be viewed without any filters whatsoever. The naked eye view of totality is completely safe and is overwhelmingly awe-inspiring!

Link to other Eclipse sites