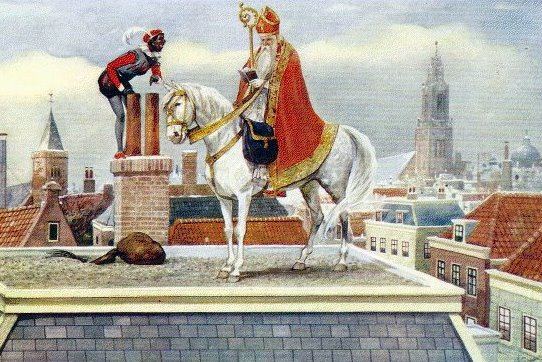 Sinterklaas or San Nicolas is a traditional Dutch holiday, celebrated every year on the night of December 5th. Being part of the Dutch Kingdom, Aruba also celebrates this holiday. The feast celebrates the name day of Saint Nicholas, patron saint of children. He was a Greek bishop of Myra (today Turkey) and became the patron saint of children based on various legends that include resurrecting children from death and saving them from prostitution.

He has a long white beard, wears a red bishop's dress and red mijter (bishop's hat). He holds a crosier (long gold colored staff with a fancy curled top) and a big book with all the children's names in it, stating whether they have been good or naughty during the year. He rides a white horse called Amerigo and is assisted by many mischievous helpers with colored black faces and colorful outfits, modeled after Moorish/ Spanish clothing. They are called Zwarte Piet (Black Pete) in Dutch. Originally Sinterklaas had only one helper, supposedly from African origin, whose name was Piet or Pieter (Pete/Peter). Through the years stories about Zwarte Piet’s real origin and background have come and go, always changing or adapting this characters' myths. 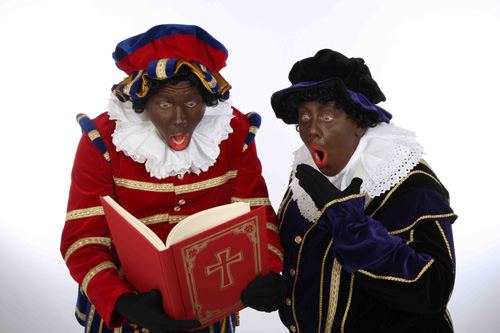 Every year in November, thousands of children welcome Sinterklaas at the Aruba Ports Authority. They sing songs for him as he arrives by steamboat from Spain. Once ashore, he parades through L. G. Smith Boulevard to Havenstraat (behind the Royal Plaza Mall) to finalize at the Census office. The activities for kids are held with music and animators. This event is broadcasted live on national television and radio stations so everyone can see Sinterklaas and his Zwarte Piets throwing candy and pepernoten (read pay-per note-an, small round ginger bread-like cookies) into the crowd. During his stay, Sinterklaas visits schools, hospitals, shopping centers and parties. 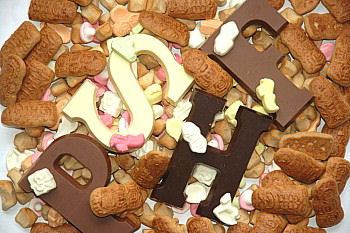 Between his arrival and the night of his birthday, before going to bed, children put their shoes outside, with a carrot, some hay or sugar cubes in it for Sinterklaas's horse. They add a letter which they’ve written for Sinterklaas, telling him what gift they would like, sing a song and go to bed. In the morning they wake up to find that the horse has indeed eaten the snack they left and their gift and sweets. Typical sweets treats from Sinterklaas are chocolate letters, usually the first of the child’s name, chocolate coins, a chocolate figurine of Sinterklaas wrapped in decorated aluminum foil. Colored marzipan shaped into fruits, animals or other objects, Taai-Taai (read: tie-tie, chewy bits of gingerbread) and lots of Pepernoten.

On the night of his birthday, December 5th, he brings gifts and sweets to the children who behaved well throughout the year while they sleep. 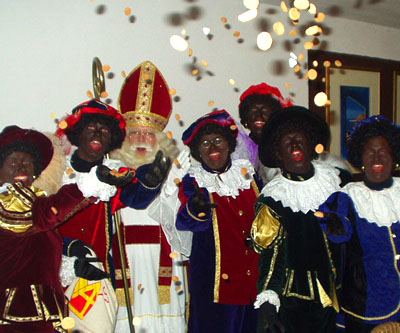 Children who behave well are sure to find the gift they asked for in their letter, but the naughty behaving kids are told that Zwarte Piet will leave them his roe (read: roo, a bundle of sticks tied together at the top) or a small bag filled with salt. In the worst case they might be put in the gunny sack in which Zwarte Piet carries the presents, and be taken away with them to Spain when they go back. This practice however has been condemned by Sinterklaas in his more recent television appearances as something of the past.