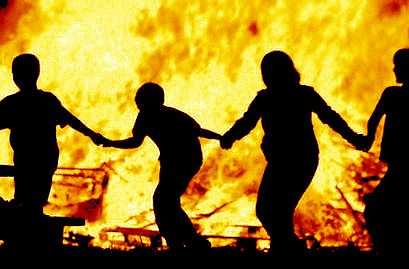 An Aruban tradition celebrated every year on June 24. History tells that San Juan festivities originated on the South part of Mexico and came down to Guatemala and other countries in Central America reaching Venezuela and passed down to Aruba.

It is a custom brought by the missionaries who evangelized the villages, by introducing a tradition for the remembrance to the sacrifice of apostle San Juan Bautista, who according to the Biblical history was decapitated by order of King Herodes, since he liked princess Salomé.

When the Spanish ruled the island, they brought a couple of missionaries to educate the locals about Christianity. The place they started to preach is where the Alto Vista Chapel is situated now. The first 2 missionaries are still to be found buried on the right front side of the chapel entrance. The missionaries allowed the natives by then to preserve some of their pagan celebrations like Dera Gai, Dande and the Carnival. That is why they combined the harvesting celebration with Saint John day.

Aruba celebrates San Juan in a unique way. San Juan festivities in the early times had to do more with superstition, mainly because the natives believed in spirits and several Gods, and they were very afraid of them. In order to be in the good grace of the Gods and spirits, they had to make several offerings. One of these was for the harvest. The purpose of the festival of harvest was to thank the many Gods for the good harvest year and to request them to bless the harvests for the following year.

It is said that in early days cunukeronan (coo-noo-ker-o-nan, Aruban farmers), after harvesting, stored the trunks of the several plants like corn and other types of wood so that they could be burned on San Juan (Saint John's Day). The farmers would then burn the woods on the night before San Juan as well as throughout the day. Fire means purification and it scares away bad luck resulting in a better harvest the following year.

During the festivities, there were several games like jumping over fire, typical dances, singing, stories and jokes being told, all this done around the fire. This festivity was something big in Aruba - it was a holiday. In the past, on June 23rd workers were given the afternoon off and the June 24 the whole day. The festivities start when the night arrives on San Juan's Eve.

The tradition to bury a living rooster (dera = bury and gai = rooster) was very common in those days. Nowadays it is obviously unthinkable to do such a thing.

Every town had its own festivity. The most important dance was where a rooster was buried leaving only its head above the ground. Over the years this has been replaced with a calabash gourd, and nowadays a synthetic rooster is placed above the ground. A man is then selected from the crowd and is blindfolded. He is then asked to kill the rooster by hitting its head real hard with a stick.

After the incorporation of San Juan, they expanded the tradition, where now men named Juan have preference over the others. The man is spun around so that he gets disoriented and no longer knows the exact location of the rooster. Then he is given three chances to hit the rooster’s head with a corn stick. An experienced dancer is guided by the wind and uses his foot to feel the ground in search of the rooster.

During these festivities, women are dressed with long yellow dresses and yellow hair holders dancing in a choreographed manner. The musicians are dressed in yellow or red with a colorful band tightened on their hips. The instruments used consist mostly of drums and other noisemaker devices. While the music plays, the dancer has to hit the rooster, but the stick is not to touch the ground, or he loses his turn. This is done to symbolize the three times the rooster sang when Saint Peter lied about not knowing Jesus, according to the bible.

About a century ago, the town of Santa Cruz changed the way they celebrate Dera Gai. They do not use a live rooster anymore, but instead changed it to one flag of various colors; red, white, blue and green, and a yellow flag with red border. These flags are then placed on a table where multiple participants, while blind folded, try to grab one of the flags. The one that grabs the yellow flag wins.

Up to this day, Dera Gai is still celebrated in every town. 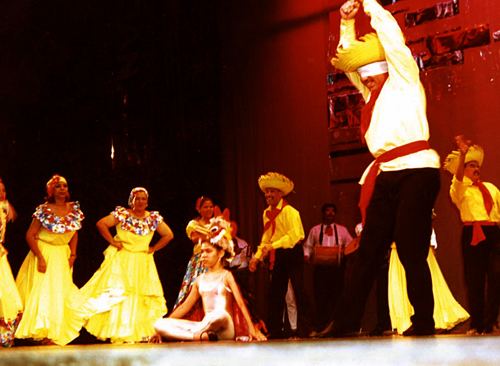 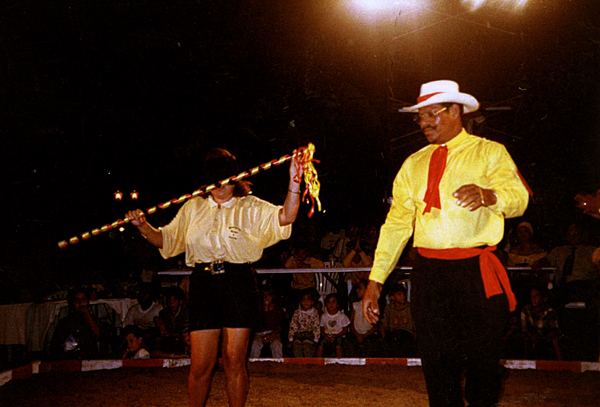