Throughout the ages, homes have tended not only to be forms of shelter but also expressions of individualism. Aruba is no exception to this tendency. One of the oldest homes in Aruba was built from caliche which is a crusty calcium substance found in the southeast hills of the island, and still stands to this day. Slanting roofs found in many Aruban homes allowed the heat to rise while windows were kept small to keep in the cool.

In earlier days, stone walls were built without the use of mortar. Instead, coral rocks were placed to a perfect fit. Sadly this is a lost art although many such walls have withstood the test of time and remain intact to this day.

Although cement and concrete have replaced the older materials, contemporary design has retained many basic elements found in the traditional houses, while adding other features such as windows which became longer though still narrow and comprised wooden louvers, introduction of patios and brightly tiled roofs as well as elaborate ornamentation for roofs , balconies and entrances. 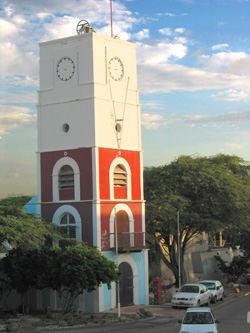 The oldest remnant of Dutch architecture is Fort Zoutman and the Willem III Tower which were completed in 1796. Fort Zoutman was named after a Dutch Rear Admiral who had outwitted a British convoy on the North Sea during the 4th British War, the tower is situated on what was then the shoreline and is armed with four cannons.

In 1868, the Willem III Tower was added to the Fort with Aruba's first public clock and served as a lighthouse equipped with a spire and petrol lamp. For almost a century from 1816, government offices were housed in Fort Zoutman, with a police department and a prison making use of the building at other times.

Today the buildings house the Museo Arubano which is a museum displaying many artifacts from Aruba’s earliest through those reminiscent of colonial times up to the present day.