Aruba's currency is the florin, but the US dollar is also widely accepted. Banks also exchange other foreign currency such as Euros. Traveler's checks are widely accepted and there is normally no charge for using them in hotels, restaurants and stores. Major credit cards are accepted at most establishments (valid ID is required) while personal checks are normally not accepted.

Aruba's currency is the florin denoted by the letters 'Awg.' but also widely known as 'Afl.' 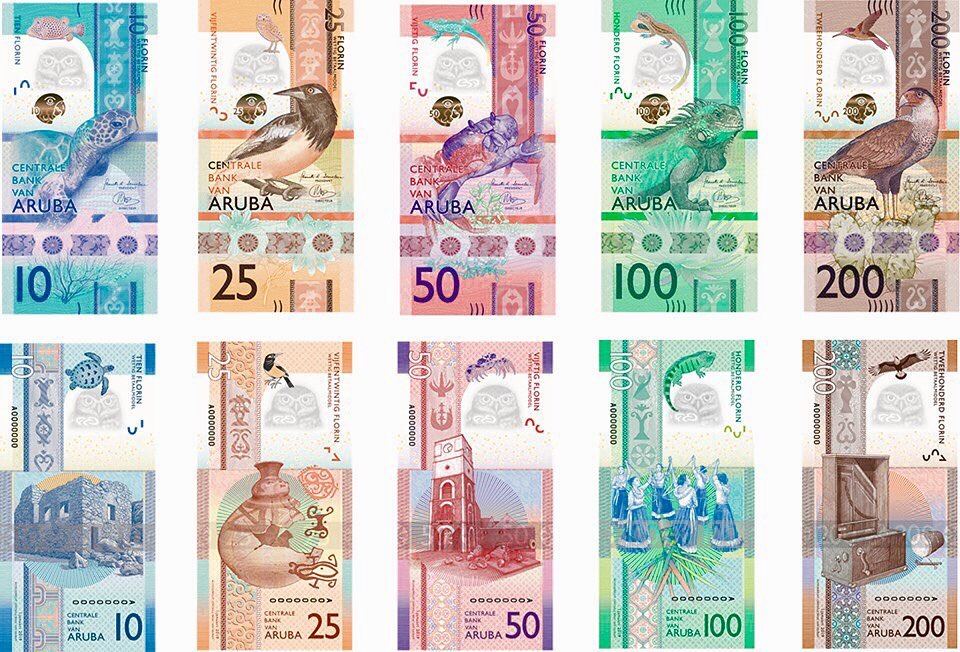 A new series of florin banknotes has been released!

Important! The timeline for the emission of the new 2019 series florin banknotes is as follows:

The official rate at which banks accept US dollar banknotes is Awg. 1.77 and checks at Awg. 1.78. The rate of exchange granted by shops and hotels ranges from Awg. 1.75 to Awg. 1.80 per US dollar.
The florin is pegged to the US dollar and therefore its value versus other currencies fluctuates with the US dollar. To see the value of your currency with the Aruban florin, please take a look at the daily Exchange Rate published by the Central Bank of Aruba.

Cash may be obtained with MasterCard, Visa and American Express cards at credit card offices, banks, in some casinos and via Western Union. ATM machines are available for cards compatible with the Cirrus or Visa Plus system. It might be an idea to check whether your card will work in Aruba by calling 1-800-4-CIRRUS or 1-800-THE-PLUS.
ATM facilities exits at most banks, but also at all gas stations and popular supermarkets. See map below for a complete list of all ATM locations.

ATM instructions are normally given in Dutch, English, Spanish and Papiamento and cash is normally dispensed in local currency. Some ATM's will also give out cash in US dollars.

All major credit cards are accepted and there are Credit Card & Traveler's checks representatives (American Express/VISA/MasterCard/Discover) who will help you should you have any problems.

The Aruba Banks listed above can also dispense US currency.

Should you need banking services when you arrive you'll find a bank at the airport. The Bank is open seven days a week: Monday to Friday from 8:00 am to 4 pm and on Saturday and Sunday from 10 am to 6 pm. There are also four banks with several branches at other convenient locations.

Recently the so-called skimming has become a criminal practice on Aruba that you should be warned about. International organized crime has found new ways of stealing your money. Skimming is the practice of altering an ATM machine with real looking card readers. The machine reads your card and pin-code. Later a copy of your card is used by the criminals, sometimes already in another country. Make sure to keep your receipt, and face the camera (which almost all ATM on the island now have). In a dispute the bank still has three months of video data to check whether you actually withdrew money at a certain place and time. The safest ATMs are always those located inside the banks, where tampering by criminals is much more difficult.

What do some typical things cost in Aruba?

Tipping is not obligatory, but is at the discretion of the visitor. However, some restaurant and bars add a service charge to your bill. When included, the service charge on food and beverage is normally around 10 to 15 percent. At one's own discretion an extra amount can be added for good service.

There is a 9.5% government tax on rooms and 17% hotel service charge on rooms, both of which will be shown on your hotel bill.