As far as can be concluded from historical records, the first European to set foot on Aruba was Alonso de Ojeda. This Spanish explorer landed on the Island in 1499. One of his first observations was that the remains he found belonging to the first settlers were considered to be larger than the average European of that day. He remarked that he had come to "an Island of giants".

Popular belief links Aruba's name with the Spanish phrase "oro huba" which means "there was gold". In fact the Spanish did not find any gold, and regarded Aruba as "valueless". Another possibility is that Aruba's name comes from the Indian word "oruba" which means "well placed ". Yet another possible derivation of the name is from two Carib Indian words "ora" meaning "shell", and "oubao" meaning "island". 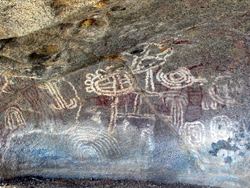 Long before the Spanish arrived, Caquetio Indians of the Arawak tribe settled on the Paraguana peninsula in Venezuela. Threatened by the Carib Indians who were extremely ferocious, they came to the Island of Aruba perhaps as long as 4000 years ago. Today, many names of towns and other geographical areas such as Turibana, Guadirikiri, Camacuri, Andicuri and Bushiri, originate from the earliest Indian chiefs and warrior settlers.

With the arrival of the Spanish many of the Indian population were enslaved and relocated to Hispañola to work in mines. Despite this their fate was merciful when compared to Indian populations on other Caribbean Islands who were exterminated. In fact, the Island was spared the usual horrors of Spanish colonial policies. 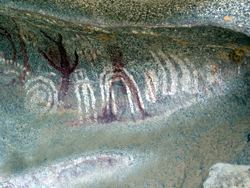 By 1642, the 80-year war between Spain and Holland was drawing to a close, and it was in this year that the Dutch took possession of Aruba. Dutch military personnel were sent to maintain Aruba, but contrary to their living conditions under their previous masters, the Indians were allowed to remain free. There was a short period between 1805 and 1816 when the British assumed control. However, the Dutch returned in 1816.
In 1824 gold was discovered and was mined extensively, becoming a major export along with phosphate, divi-divi pods for use in leather tanning and aloe. At one time Aruba satisfied a considerable proportion of world demand for this plant's gel - used for pharmaceutical purposes and well-known for its capacity to alleviate sunburn pain.

Eventually gold supplies dwindled and the once-booming mining industry became unprofitable resulting in all operations ceasing in 1916. It was ultimately black gold that brought real prosperity. 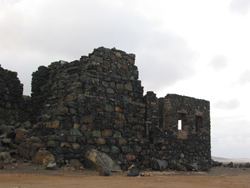 Remains of the Aruban gold mine

In 1928 Royal Dutch Shell built the Eagle oil refinery and this was immediately followed by a refinery built by Lago Oil and Transport Company Ltd. in San Nicolas. Royal Dutch Shell ceased its operations in 1953, after serving as a depot for both refineries during the second world war. In 1932, the Standard Oil Company of New Jersey (Esso, now known as Exxon) took over the Lago refinery. The refinery employed well over 8,000 people, 16% of Aruba's population, and up until the 70's was one of the largest in the world.

The Refinery at San Nicolas 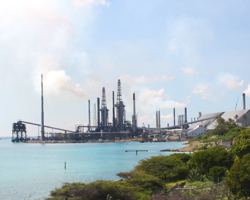 On March 31, 1985, Exxon, pressured by a global oversupply, closed the refinery but it was reopened by the Coastal Oil Company of Houston, Texas on April 20,1991.

Within three decades Aruba became an island with probably the highest standard of living in the West Indies. The illiteracy rate, for example, is exceptionally low. Today tourism has become the major factor in the island's economy with many major hotel chains setting up in Aruba. In just a few short years, Aruba has become one of the most popular vacation spots in the Caribbean, with visitor figures approaching a million annually.

Explanation on some name places in Aruba

Named after "Huis van Oranje" (Orange House), this was the name of the Royal family during the Dutch colonization. While this is the official name, the town people still call the capital of Aruba "Playa". This small town got her name Oranjestad in 1824 when the word got out that gold was discovered in Aruba, a big party was held in honor of the governor Cantzlaar visit.

Around 1620 a war took place between a small group of Indians and the Frenchmen. The Indians wanted to flee seeing only defeat and they hid in a cave. The Frenchmen found their hiding place, but it was difficult for the Frenchmen to get into the cave. The Frenchmen got an idea how to make them come out, so they started a fire at the entrance filling the cave with smoke, killing the Indians inside. Nobody knows if this story is true, but this is how the place got its name.

The name came from a legend. The story tells of an Indian girl called Macuarima who lived at the edge of Santa Cruz. Macuarima was loved by everyone in town, she did her utmost to give a hand when needed, she was compassionate and she was very beautiful. When she met Pati Blanco an Indian boy, she instantly fell in love with him. He took her away on a boat to Venezuela. The Aruban writer Ernesto Rosenstand wrote the whole story in his book "Macuarima".

On February 11, 1958 there was much celebration related to the appearance of Virgin Mary in Lourdes, France. A San Nicolas preacher named Erkamp came up with the idea to place a statue of the Virgin Mary in the cave at Seroe Preto. A year later, Monsieur Holterman blessed the statue. Since then it is a favorite place to pray.

The name speaks for itself alto means high and vista is view. Therefore, it is high view.

In the time of the gold discovery, the workers used donkeys to transport the gold and later a steam tractor. During a rainy day, the tractor got stuck in the mud and the men had to tie the wheels with a rope to get it out and running again. This was the talk of the day so the place got the name Marawiel, which translates in English to "tie the wheel".

Boton translates in English to "button". At this place and especially on the nearby hill you could find thousands of small round shells with a small opening in the center. The size of these shells are not bigger then a 25-cent Aruban coin. People started to refer to them as "boton". Children used to bring a lot of them home since at the time it was trendy to use them to make a collar.

Translates in English to "Horses Bay". At the end of the 18th century, horse merchants decided to live near the bay at Oranjestad, next to the horse-shipping place Aruba's port. This place got its name Paardenbaai-haven.

Translates in English My Pleasure. In the 18th century, Aruba was one of the largest producers of aloe. And Mon Plaisir was the largest land growing the aloe plants.

Seroe Colorado translates to "colorful hill". The name of the place refers to the 30 meters high of pure limestone at the endpoint in the east of Aruba. The hill got its name due to the brown yellowish color of the limestone.

It is said that Savaneta name became during the Spanish colonization in 1840. Savaneta means Sabana chikito (small savannah).

Vader Piet is at the northeast coast of Aruba. In 1829 a man named Pieter Lampe lived there and he was a farmer and foreman. He was called Vader Piet because he was a beloved man and treated everyone with kindness. In an incident at the time, a slave killed Vader Piet and since then the place was named after him.

San Nicolas was named after a man who owned of a big piece of land there. This man was named Nicolaas van der Biest. In the early days owners of big piece of land are addressed by "Shon" with the first name after. So the people used to call him Shon Nicolaas. That later turned into San Nicolas. Some stories indicate that the Spanish influence had something to do with this.

A fort that was also the first lighthouse built in 1869, and used an oil lamp. This tower also has the first public bell in Oranjestad. The lamp was lit for the first time on King Willem III's birthday celebration, hence the name.

A part of the L. G. Smith BLVD was changed in 4 July 1992 to Juan Irausquin Boulevard.Â  This part starts from Tamarijn Beach Hotel to Holiday Inn Aruba. This is in honor of the person responsible for the infrastructure for the tourism industry in this area. In front of the post office, there is a statue of him.

A ship with the name California sank nearby very long time ago. The lighthouse is also called Faro Blanco of Hudishibana.

There are two stories that explain the name: 1. A man called Flip Kelly was rejected by his girlfriend. He became suicidal and killed himself by falling in a tank nearby. 2. Flip Kelly was riding his horse one day and suddenly the horse tripped on the mud and went head on in the water drowning with Flip who was unable to untangle himself.

A family with the last name Leendert were owners of the land.

Land named after the House of aloe plantation. Dedicated to a saint.

Kudi di Wecha is the name of an Indian who was a very curious witch doctor. Originally, the Indian name was Wecha and he had a big kudi. (a big hollowed out stone)Â  He used it as a receptacle for rainwater.

The story tells of the Spanish asking the Indians where the gold is. The Indians pointing in that direction telling "Aya para dera" meaning "we bury over there" (It can be a mispronunciation of the word "oro" with "morto"). The Spanish were very disappointed to find only bones instead.

By the 18th century the Commander's (the leading man) governing board seat was situated here along the bay.

Parties were held in the rooi among slaves with music and some fun. Rooi is a dried out riverbed. Tamboe is a type of snare drum instrument made from pig skin.

Babijn is named after the Frenchman Rene Babin, who lived in Aruba around 1779.

Named after Captain Robert Rodgers, who chose the harbour of San Nicolaas for the importation of crude oil.

As many other small towns names came from the house of plantation like San Barbola, Mon Plaisir, Modanza, Montserat and Planterust. The same was for Washington's Plantation. In 1914 Nadi Henriquez built a new house and gave it the name House of Washington.

Grapefield originated its name from the grape trees which used to grow here. In the past the Exxon Company has dumped its waste here and most of the trees have withered and died. When the Exxon Company had to leave they removed the "Pitch" from the area before they left and the grape trees are slowly growing back. With a bit of luck the area will once again become flourished by them. Remnants of the pitch can still be seen on the field and many holes in the cliffs are still full with "pitch-dust”. Hopefully one day this area will be completely restored to its natural clean environment.