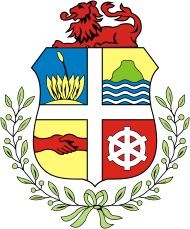 Aruba's Coat of Arms has been in use since November 15, 1955. The design was created by "Atelier voor Heraldische Kunst," of Amsterdam, Holland, but it was later altered to reflect of the symbols of Aruba.

The following are the components of the Coat of Arms: